The most immediate concrete change the Tax Cuts and Jobs Act (TCJA) will bring about for employers is new payroll tax withholding rates. 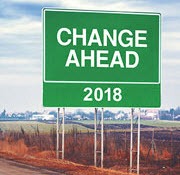 Here's the latest word from the IRS: “We anticipate issuing the initial withholding guidance in January reflecting the new legislation, which would allow taxpayers to begin seeing the benefits of the change as early as February. The IRS will be working closely with the nation's payroll and tax professional community during this process.”

Another change involves tax incentives to encourage employers to pay employees — though not necessarily their full salaries — when they're absent due to their own sickness or that of a family member. (Employers in several areas are already required to do so by their own state laws.)

To receive a general business tax credit in 2018 and 2019, employers must grant full-time employees a minimum of two weeks of annual family and medical leave during which they receive at least half of their normal wages. Ordinary paid leave that employees are already entitled to, such as vacation or personal leave, or any form of leave already required by state and local laws, doesn't qualify for the tax credit.

Employees whose paid family and medical leave is covered by this provision must have worked for the employer for a year or more, and not had pay in the preceding year exceeding 60% of the highly compensated employee threshold, set at $120,000 for 2018 (which works out to $72,000).

The minimum credit equals 12.5% of the eligible employee's wages paid during that leave, up to a maximum of 25%. Within that range, the amount of the credit rises as employees are paid more than the minimum of half their normal compensation during their leave period. Employers that qualify may claim the tax credit for a maximum of 12 days per year of family and medical leave.

While most authors of the TCJA are probably hoping employees who will see a higher paycheck will use the difference to stimulate the economy by spending it immediately, there's another scenario employers might consider: Employers that are concerned their employees aren't saving enough for retirement could suggest that some might elect to “bank” their tax cut “raise” in the form of an increased 401(k) contribution.

One tool for motivating employees to save more for the future is to provide some illustrations of the long-term impact of a higher savings rate. For example, a $50 increase in 401(k) savings deducted from a biweekly paycheck would accumulate around $50,000 in greater savings over a 20-year period, assuming a 6% annual growth rate.

It's also noteworthy that early versions of the TCJA would have drastically reduced employee opportunities to save for retirement in a 401(k) using pre-tax dollars. One proposal that would've hit many taxpayers hard would have limited contributions by requiring them to combine participation in multiple plans, including mandatory employee contributions to defined benefit pensions.

Those ideas were dropped.

The TCJA did, however, make some technical changes in the retirement plan arena. Most notable is that the new law gives a break to plan participants that have outstanding 401(k) loan balances when they leave their employers. Under current law, a participant with such a loan who fails to make timely payments due to his or her separation from the employer is deemed to have received a distribution in the amount of that outstanding balance, triggering adverse tax consequences. The participant, however, is permitted to roll that amount — assuming he or she has sufficient funds available — into an IRA without tax penalty if he or she does so within 60 days.

Under the new law, former employees in that situation have until the due date of their tax returns to move funds equal to the outstanding loan balances into IRAs without penalty. The same opportunity would apply if they were unable to repay their loans due to their plans' termination.

Some TCJA provisions affecting employee benefits seek to recoup tax relief granted in other parts of the law. For example, the TCJA tightens up the definition of employee achievement awards eligible for tax deductions on the part of employers, and exclusion from income taxation for the employees.

Under the new law, effective for amounts paid or incurred after December 22, 2017, no tax deduction is allowed for settlements, payouts, or attorney fees related to sexual harassment or sexual abuse if such payments are subject to a nondisclosure agreement.

In general, a taxpayer generally is allowed a deduction for ordinary and necessary expenses paid or incurred in carrying on a trade or business. However, among other exceptions, there's no deduction for: illegal bribes, illegal kickbacks or other illegal payments; certain lobbying and political expenses; fines or similar penalties paid to a government for the violation of any law; and two-thirds of treble damage payments under the antitrust laws.

The Inflation Effect and Other Changes

Another section of the law alters the inflation index used to periodically adjust the limits on contributions to health flexible spending accounts, health savings accounts, and the threshold for the value of health benefits subject to the 40% “Cadillac tax” (currently scheduled to take effect in 2020).

Instead of using the regular consumer price index (also known as the CPI-U), annual limit adjustments will be set using the “chained CPI-U.” That “chained” version tends to rise at a slower rate than the unchained index. The same formula change was made applicable to IRA contribution limits.

When you add it all up, many employers and employees are likely to be happy with the overall effects of the TCJA. The task of digesting all the changes might cause a few headaches in the short run, however.